For breakfast, seek out foul. Pronounced “fool,” the dish is comprised of mashed fava beans seasoned with spices, garlic and chili pepper and served with Egyptian flatbread and pickled veggies. It’s a very cheap dish that is filling and something I’d enjoy regularly if I could. Foul is traditionally served on silver food carts or at mom & pop restaurant nooks. It is the ultimate eat-with-your-hands dish that locals and tourists alike love.

At lunchtime, koshari, pronounced ‘ko-sha-ree,’ is my absolute favorite dish in Cairo. It is a combination of macaroni noodles, vermicelli pasta, chickpeas, and lentil beans accompanied with garlic vinegar, marinara, and chili sauce and topped with crispy onions. This dish can be eaten family-style at a sit down restaurant or grab on-the-go at restaurants like Sayed Hanafy or El Tahrir, two koshari-famous eating establishments that are widespread throughout Cairo. It is a modest dish that is also very inexpensive, but is the quinnessential taste of Cairo.

For dinner, think outside of your comfort zone. At Kababgy El Azhar Farahat Restaurant, located in Old Cairo in the area of El Azhar, stuffed pigeon is the star of the menu. A local delicacy, the pigeon is first stuffed with rice that is seasoned with bayleaf, cardamom, and cinnamon before being tenderized in a stock and finally pan seared. The pigeon is served with a traditional Egyptian salad which is usually chopped tomatoes, onions, and cucumbers and a small bowl of tahini. Anthony Bourdain, in his roadmap to Egyptian eating, described this dish as “utterly delicious.” 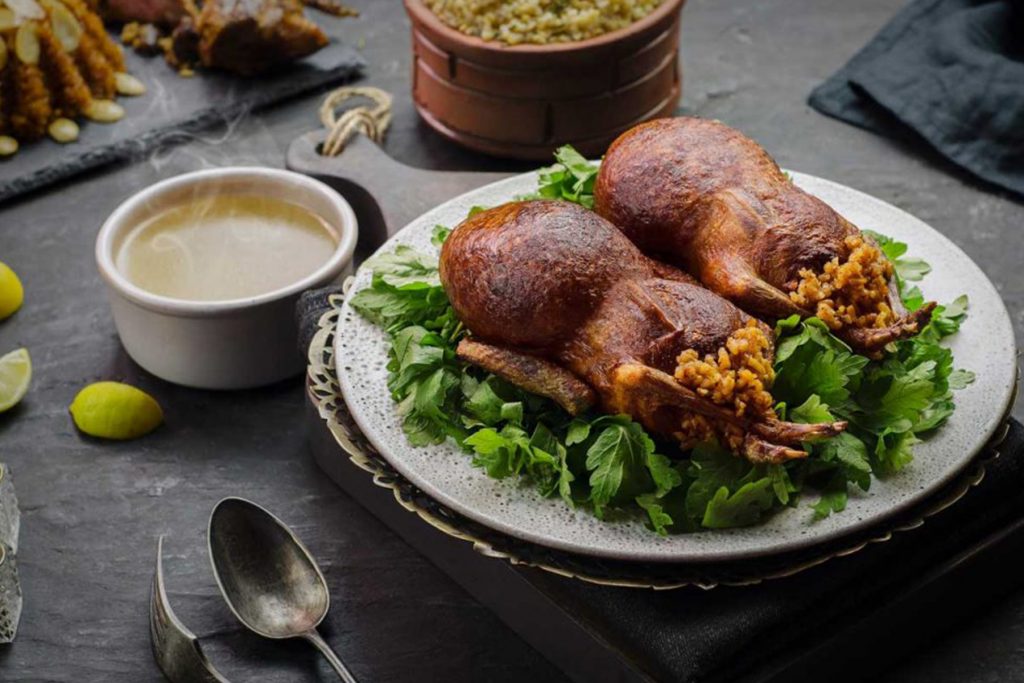 Other dishes that are a must-try include hawawashi, a spicy, minced meat prepared with peppers and onions and served inside a flaky pita bread; shawarma; and falafel, which is at its best served inside Egyptian pita bread with tomatoes, cucumbers, and tahin.